One of London's rarest train journeys travels over a certain section of track once per weekday in each direction. Operated by Chiltern Railways, it's the 1057 from South Ruislip calling at London Paddington only, which then returns as the 1136 from London Paddington to West Ruislip, also calling at South Ruislip. Look at TfL's official London Rail and Tube Services map and you'll see that South Ruislip / West Ruislip trains terminate at Marylebone, and that Chiltern Railways do not operate from Paddington. Apart from this once-a-weekday service, that is!

I discovered this trip when it was covered by Diamond Geezer and Londonist.

Most services like this exist because withdrawing a service altogether involves a lot of red tape and it is often easier and cheaper to run a minimal service than actually shut the line or station. An 1844 Act of Parliament which required at least one service per day on every route in the United Kingdom resulted in similarly infrequent trains, so these are often called "Parliamentary trains".

However, in this case, the unique piece of track is the Acton-Northolt line which (no longer) has any stations of its own. The line is still used for freight and is not in danger of closure. The main reason for the existence of this service is maintaining driver "route knowledge". The line is occasionally used as a diversion by Chiltern Railways when engineering works affect access to Marylebone. In 2008 during work on the West Coast Main Line, Virgin Trains diverted their Euston-Birmingham service on a meandering route that included this line. So once every so often, every Chiltern driver takes this train to keep their route knowledge up-to-date.

The train leaves Paddington and follows a conventional route as far as Old Oak Common (just before Acton Main Line) where the Acton-Northolt line branches off to the right. The line (single track most of the way) then parallels the Central line from North Acton to Northolt, past Hanger Lane, Perivale and Greenford, but with no interchange with any of those stations. Between Northolt and South Ruislip the Acton-Northolt line merges with the regular Chiltern line that has come from Marylebone.

So, since I discovered this train it has been on my London Transport bucket list. I finished the first leg of my Labyrinth challenge at West Ruislip so that, if the opportunity arose, I'd have an excuse to use this journey to start the second leg.

That opportunity arose on Friday 1 July 2016! 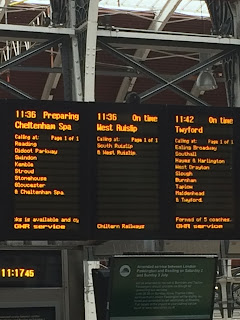 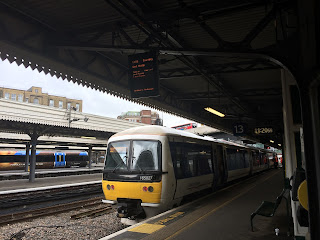 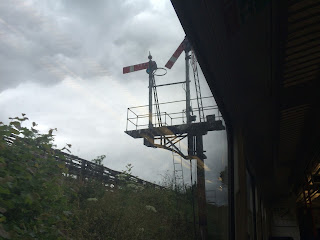 The last semaphore signals in London (at Greenford)