A guide to Redbridge railway station 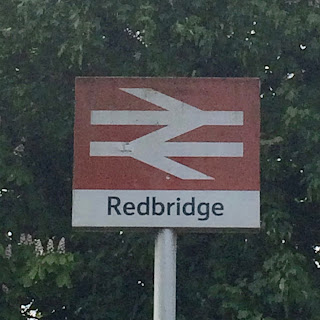 Why Redbridge? Well, it's all down to "All The Stations". I recommend that you go and read about it at allthestations.co.uk, but the summary is that it is a project of Geoff Marshall and Vicki Pipe in which they will film a documentary as they visit all 2563 railway stations in Great Britain. By profession, Geoff is a video producer for londonist.com, also appearing on their's and his own YouTube channels. By reputation, he is a serial Tube Challenger who has twice held the Guinness World Record for the fastest time to visit all 270 stations of the London Underground. Vicki works in museum education. They successfully funded "All The Stations" through Kickstarter and I chipped in.

@diamond_tittle As part of your #AllTheStations pledge you get a shout out on twitter, to say thanks and that you're BRILLIANT!
— All The Stations (@allthestations) April 30, 2017

One of the rewards available to Kickstarter supporters was to "adopt" a station, which basically means that your name will be attached to that station on their web-site. They recently allowed supporters to choose their station on a first-come-first-served basis, in the order in which you made your pledge. I didn't pledge until the funding deadline was nearly up (backer number 1472 out of 1564) so I pretty much had last dibs!

As I imagine most backers did, I looked for local stations, but most of the stations in Southampton were already taken, and I ended up choosing Redbridge. It's not local to where I live, Southampton Central is the most convenient station for me, but Redbridge is close to where my father's side of my family come from. Despite that, I'd never actually been to Redbridge station. I've been through it on non-stopping trains many times, but I can't recall even having been on a train that stopped there. Now that I've adopted it, I thought I'd better remedy that. 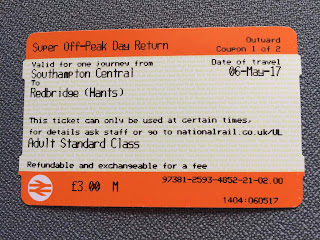 Redbridge sees a few peak-hour trains that go beyond (including one early train that comes from London Waterloo), but the only regular service is the hourly South West Trains 'Figure of Six' service between Salisbury and Romsey. 'Figure of Six' because from Salisbury it calls at Dean, Mottisfont & Dunbridge, Romsey, Redbridge, Millbrook, Southampton Central, St Denys, Swaythling, Southampton Airport Parkway, Eastleigh, Chandlers Ford and Romsey again. So, Salisbury is at the top of the 6 and after it has been through Romsey it goes in a loop back to Romsey.

This means you need to make sure you go in the right direction. For instance, if you wanted to get from Redbridge to Romsey you would think that the train that has Romsey as its destination would be the one, but that would be going "the long way" around the loop and take 36 minutes. You should take the Salisbury train for which Romsey is the next stop in 7 minutes. Even though the Salisbury train is timetabled to arrive at Redbridge 16 minutes after the Romsey train it will still get you to Romsey 13 minutes earlier.

Geoff & Vicki will probably have to get this service as it is also the only regular service for Dean, Mottisfont & Dunbridge, Millbrook and Chandlers Ford as well. If they're reading this, I hope it helps! 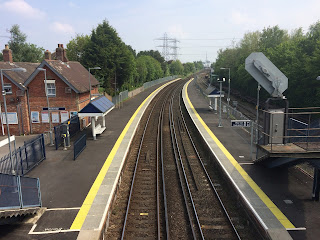 The view from the footbridge looking east, towards Southampton 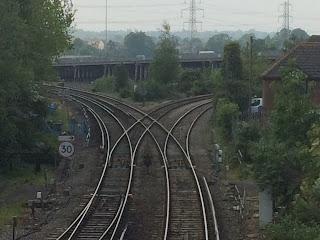 The view from the footbridge looking west. Turn left for Bournemouth and Weymouth. Turn right for Salisbury, Bristol and Wales.

I pass this way on my way to work every day (along the A35 you can see in the background in the photo above) and I can see a small waterside park which I have always thought would be cut-off by the railway. Indeed, as I have now discovered it is only accessible from the footbridge of Redbridge station, it's called Redbridge Wharf Park, it was donated by the docks, it contains a few pieces of playground equipment and there were no (other) people on Saturday. 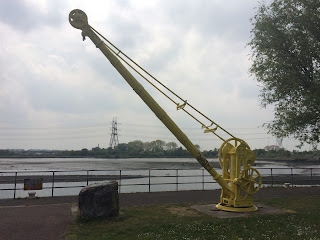 I don't know if this is a piece of genuine dock equipment! 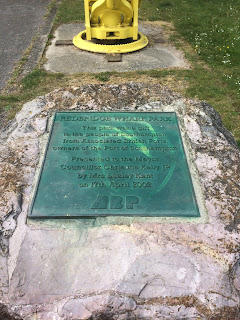 Postscript 1: That train from London Waterloo that I mentioned leaves at 0612 for Branksome. It stops at most stations, making 26 stops in total. Is there another train anywhere in the country that makes more stops?

Postscript 2: Don't confuse Redbridge in Hampshire with the tube station on the Central line. The first time I was at Southampton Central after I made my "adoption", I overheard a poor lady getting assistance from the station staff. She had arrived at Gatwick Airport and wanted to get to Redbridge but she ended up here rather than London!


Posted by Michael Churchill at 15:56