On 1 February 1875, the Metropolitan Railway extended from Moorgate to Liverpool Street.

Route map of London Underground as it was 1 February 1875

When the Met initially extended to Liverpool Street, for a few months, it used the platforms of the mainline station.

For this post I've decided to document how the National Rail station has changed since 1996, when "Mission : Impossible" was filmed there.

It's been 22 years so I don't think there is any need for a warning about spoilers. Ethan Hunt (Tom Cruise) has stolen the NOC list by dangling from the ceiling of the computer vault at CIA headquarters. This is followed by a night-time establishing shot of the outside of Liverpool Street tube station on the corner of Liverpool Street and Old Broad Street.

Nothing seems to have changed here. 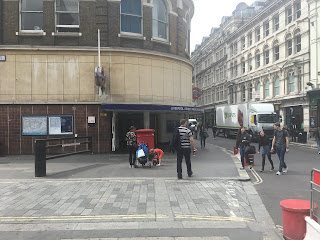 The IMF team have set up in a safe house above this entrance to the tube station. In an attempt to draw them out, the CIA have arrested Ethan's mother and uncle on a trumped-up drugs charge. Ethan goes over to the National Rail station to contact Kittridge at the CIA.

Ethan is going to use the public telephones seen to the left of the following shot.

There are no longer public telephones under those stairs - they have been replaced by cash machines. 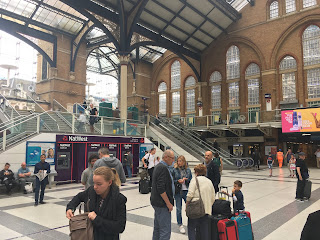 For youngsters reading this, public telephones used to be a popular and often necessary way to communicate with each other. Nowadays, the versions that can be found in red boxed are only used for foreign tourists to take selfies.

Ethan calls the CIA and uses the station clock on the departure board to time the call, hanging up just before the CIA can fix an exact location, but long enough that they know he's in London.

At the time of filming, Liverpool Street still had one of those split-flap display boards that used to flip over many times to display departure information. 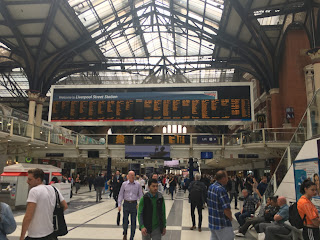 The departure board now uses LED dot matrix displays, which actually use a lot less space.

The man in the mac in the photo above is Jim Phelps (Jon Voight) who was assumed to have died at the start of the movie. After Ethan's surprise at finding Jim alive, they sit down in a cafe.

IMDB says that this was filmed at Ponti's Cafe. The station map on the National Rail web site shows this to be at the end of the row of shops on the upper level, close to the Bishopsgate entrance. Most recently occupied by an Ed's Easy Diner, this unit is now empty, with plans for it to be redeveloped into a pub. 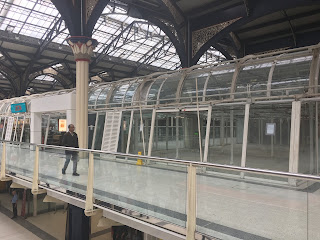 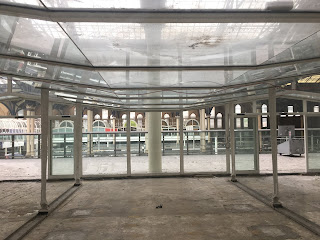 They appear to have filmed this scene in a booth further in, one which overlooks the tracks.

Note that all the screen captures from the film show billboard adverts for the TGV service to Paris, establishing the climax of the film. Of course, it's the Eurostar thats goes to Paris, and at the time it left from Waterloo, not Liverpool Street.

On 12 July 1875, the sub-surface station at Liverpool Street opened, then called Bishopsgate, and the Met no longer used the mainline platforms.