I recently got back from spectating at the European Athletics Championships in Berlin. While I was there I did, of course, find a few interesting things on the U-Bahn. 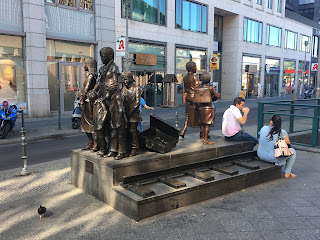 Leaving Friedrichstraße station, I almost thought I was outside Liverpool Street! Both this sculpture and the one in London are part of a series commemorating the "Kindertransport" which saved the lives of many Jewish refugee children before World War II. The sculptor, Frank Meisler, who passed away in February at the age of 92, was one of those children. There are also sculptures at Gdansk in Poland and at the Hook of Holland. 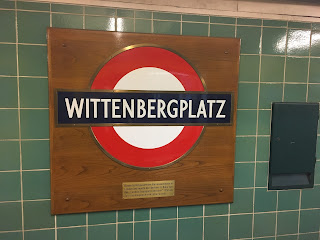 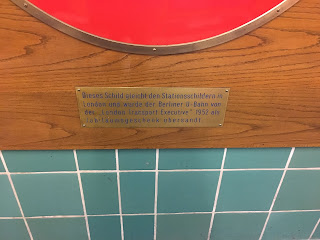 Wittenbergplatz station, with its marvelous entrance building in the middle of the square, is worth a visit anyway, but on platform 1 you can find this London Underground roundel. The plaque below explains that it was a gift from the London Transport Executive in 1952, to mark the 50th anniversary of the Berlin U-Bahn. 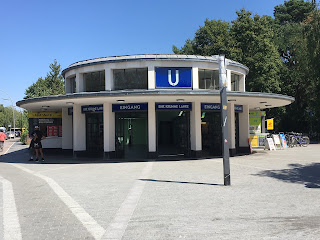 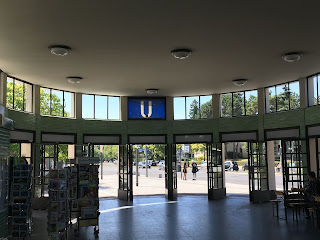 Wittenbergplatz, along with many other notable stations, is the work of Swedish architect Alfred Grenander. He worked on U-Bahn stations from 1902 until his death in 1931. I went to the end of line U3 to visit one of his 1929 works, Krumme Lanke, which is said to have inspired Charles Holden in his 1930s designs for the Piccadilly line, including Chiswick Park.
Posted by Michael Churchill at 09:28

Email ThisBlogThis!Share to TwitterShare to FacebookShare to Pinterest
Labels: Other cities