Route map of London Underground as it was 1 October 1877

I won't normally blog about closed stations, but I think Hammersmith (Grove Road) deserves an explanation. 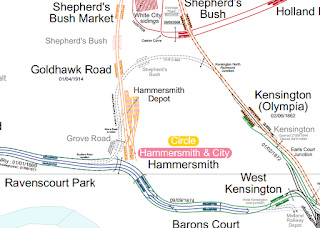 In 1869, the London and South Western Railway (LSWR) opened a new line that branched off north of Kensington (Olympia), then called Addison Road. The new line went in a loop, under then parallel to the Metropolitan Railway, now the Hammersmith & City line (HCR), then headed west towards Richmond. Hammersmith (Grove Road) was a new station on this line.

In 1870, a junction was opened north of Grove Road, connecting the LSWR line with the HCR and the Great Western Railway briefly ran services between Paddington and Richmond.

On 1 October 1877, the Metropolitan Railway also started running services along this route, so that is the date that Grove Road became an "Underground" station.

The stations between Hammersmith and Richmond that featured on my last blog (1 June 1877) come from when the District Railway extended from their Hammersmith station to a junction with the LSWR line. The District Railway had a competitive advantage with a more direct route to central London, and gradually the other train companies withdrew from the Richmond route. The Metropolitan service ended 31 December 1906, so that's when Grove Road ceased to be an "Underground" station. Eventually, the LSWR loop, Grove Road (and LSWR's Shepherd's Bush station) closed completely in 1916.


On 1 February 1878, Earl's Court was relocated to its current position.